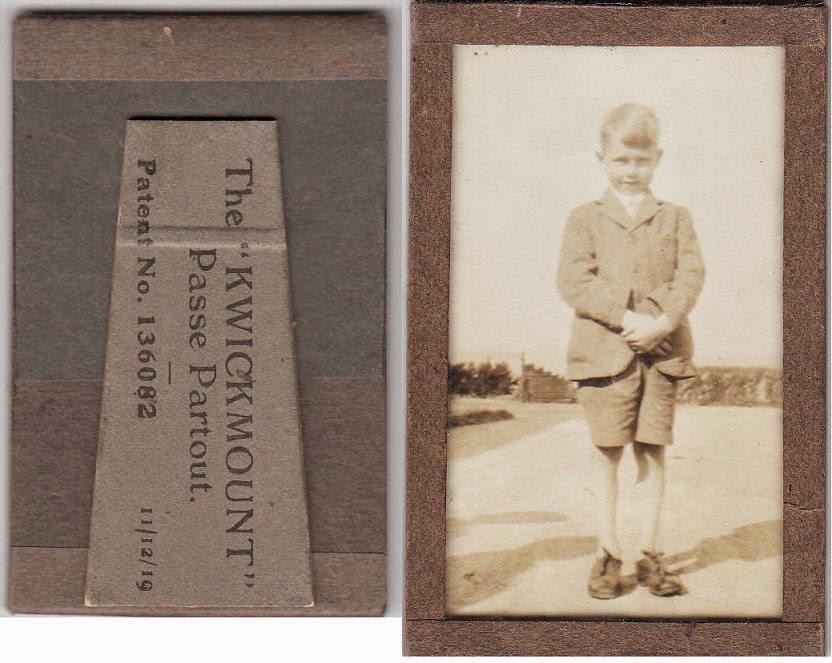 Passe partout picture framing was massive in the 1920s.

But what if you couldn't master the art of turning those sticky paper strips into an attractive frame? Well, then there was the Kwickmount method, patented in December 1919. Buy your cheap passe partout frame ready pasted, put a picture in via the convenient aperture in the back, close it, and voila!
Posted by Drew at 15:04 No comments: 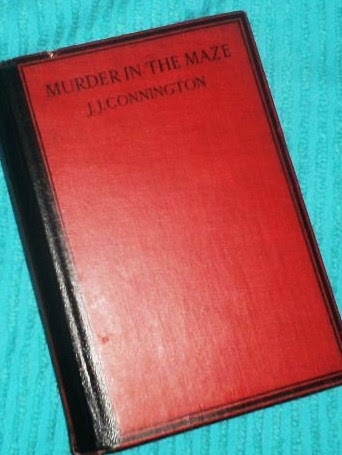 Picture it: an English country house called Whistlefield in the 1920s. Young Vera Forrest and her friend, Howard Torrance, are guests there. The house owner is one Roger Shandon, a not very pleasant fellow. His twin brother, Neville, is also a little on the beastly side (old bean). The brothers decide to spend an afternoon in the two centred hedge maze on the estate. It's an elaborate maze, and they feel they're bound to get the peace they require in the two centres - one brother opts for Helen's Bower, the other The Pool Of Narcissus.

Vera and Howard arrive at the maze unaware that anybody else is around, and split up - each intent on beating the other to one of the centres. Then Vera hears disturbing sounds - cries of pain, a strange rattling noise, a thud... something terrible is happening close at hand, but she can't see what. And she's lost in the maze and can't find the way out. Then Howard cries "MURDER!" - he's reached one of the centres and has found one of the Shandon brothers dead... and it seems the killer is still in the maze... Vera hears somebody walking softly alongside the other side of the hedge by which she is standing - and it's not Howard... it's the murderer! EEEKKKK!!!!!

Just then, there was a dull thud as the spine and back cover fell off, endangering several pages... my brilliant JJ Connington 1920s murder mystery book, a first edition, was falling apart at a crucial moment in the plot...

All right, all right, I know I should get a Kindle or something, but I love the feel of a real book in my hands, and Murder In The Maze is right up my alley as a 1920s country house murder mystery never fails me to grip me. I was addicted to Cluedo as a kid.

Now, the book was falling apart, reading further would not be the pleasant experience I was hoping for - more a continuing struggle to assemble the pages in order as the departure of the spine and back of the book had put the pages in peril of likewise detaching themselves.

I wondered if I could stick the blasted thing up with parcel tape? Now, I'm a great lover of books, I appreciate them and respect them, and it seemed a shame to do that with a first edition - it would look so ugly. And I wasn't convinced it would hold.

Then I had a brainwave. I cut several strips of Samuel Jones vintage passe partout tape from a reel, wetted them thoroughly, and repaired the book with them. I had no great hopes that it would work - could passe partout support such a venture? You must remember that the spine and the back of the book had become completely detached.

After I had completed the operation, I was impressed at the effect the handsome leather-like paper tape had on the look of the book. I left it overnight so that the special passe partout "cement" could set and the next day was able to continue reading.

I have now finished the book, the murderer has been unmasked and the passe partout still holds firm.

A great job - and it just shows how versatile passe partout tape can be.

But having finished the book and experienced its chilling climax in the Whistlefield Maze, I don't think I'll be venturing into Hampton Court or Hatfield again in a hurry...
Posted by Drew at 16:53 No comments: 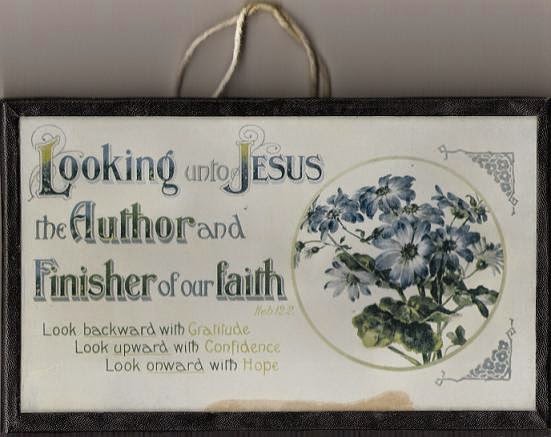 So, there I was, with the glass to the passe partout frame encasing Great-Great Grandma's religious text broken, and passe partout picture framing tape no longer available in the shops.

I didn't really want to re-frame the text conventionally, I wanted it in the style Great-Great Grandma had had it, but what could I do?

I bought some book binding paper, in quite a similar style to the black stippled/pebbled leather-like effect of passe partout paper tape, cut some strips and used that with some modern glue. It looked fine, but the glue didn't stick as well as the old passe partout gum.

Meanwhile, now quite fascinated by the concept, I began some research into the history of passe partout paper picture framing tape.

It seems that passe partout tape picture framing was probably at its most popular from the early-to-mid 20th Century. It was the way to frame for those who didn't have much money, the tape was cheap as were the other materials, and it found its way on to the curriculum of many English schools. The tape could also be used to decorate and stengthen other objects - and even for interior decorating!

It wasn't just poorer folk that liked to passe partout. It was considered a charming and craftly pursuit for the better heeled, too.

It was really from the 1960s onwards, as cheap, mass produced picture frames began to take a hold, that passe partout started to lose its hold on the affections of the working class picture framing public, its main buyers.

I was told that when Wiggins Teape bought the Samuel Jones company around 1989, the machine used to produce the tape was in such a poor state of repair, and sales so low, that production ceased and the last rolls of Samuel Jones passe partout tape were sold in the early 1990s.

Other companies, like Dennisons, also made passe partout tape, but I believe that Samuel Jones (with its distinctive Camberwell Butterfly motif on the packaging), was probably the last manufacturer in England.

I was a late convert to computers. Tim Berners-Lee had, of course, invented the World Wide Web in 1989 and it was up and running in the early 1990s, but I held out. I didn't need computers! What possible use could a computer be to me?

After I purchased one in late 1999, I soon found out. I discovered a plentiful supply of vintage, sealed passe partout on internet auction sites.

And was finally able to restore Great-Great Grandma's text to the way it should be.

And it hangs in my living room to this day.

If you find any vintage passe partout tape on your travels, how do you date it? Well, if it's Butterfly Brand, made by the Samuel Jones company, there is an easy way: passe partout manufactured in the 1950s was designated "MADE IN ENGLAND". From the 1960s onwards, it was designated "MADE IN GREAT BRITAIN". The "MADE IN ENGLAND" version has the product details printed on a circle of paper inside the packaging; the "MADE IN GREAT BRITAIN" version has the product details printed on the cellophane wrapping.

In answer to a query, the modern Lion Brand tape listed as "passe partout" is not the paper tape we refer to in this blog.
Posted by Drew at 14:55 1 comment: 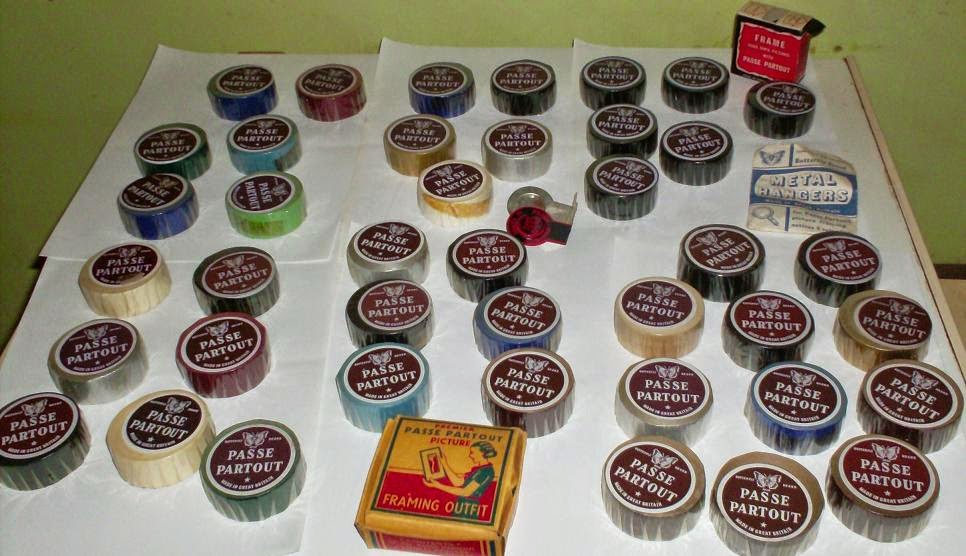 Some of my collection of passe partout tape.

The passe partout saga began for me back in the mid-1980s, when I was given an old religious text which had once belonged to one of my great-great grandmothers (in point of fact, my maternal grandmother's father's mother!). Although not particularly religious myself, I was heavily "into" family history at the time (still am!) and was delighted with this bequest from one of my grandmother's cousins.

The trouble was, the text was framed in an attractive pebbled black paper tape which, after years of dusting, had worn through at the top so that there was a large slit right along that surface.

"What is this paper tape stuff?" I asked Gran's cousin. I had seen it before - there had been some old maps at school framed in it, but I'd never used it for framing myself. By the mid-1980s, we were well and truly into the era of cheap but attractive ready made picture frames of tremendous variety.

"Didn't he go around the world in eighty days?" I queried.

"No, not that Passepartout!" laughed Gran's cousin. "You can get the tape at stationers."

This was 1986. I was born in 1965 and had never seen passe partout on sale at our local stationer's, but along I went.

"Got any passe partout?" I asked an assistant, expecting a blank look in reply.

"Not in stock," she replied calmly. "But we can get you some in. It'll take about four days."

And, in four days, I got a telephone call informing me that the passe partout was ready to collect.

It was sticky stuff. Very sticky. I dabbed water on it and applied it to the worn edge of great-great grandma's text, slid it around to get it straight, sealed it front, top, and back, snipped off a couple of rough mitred corners and proudly surveyed my handiwork. The text looked good. Trouble is, the newness of the repaired edge passe partout looked decidedly better than the other three edges with the old passe partout.

But I was not particularly keen on the art of passe partout.

It was too darned sticky. Slid about so it was difficult to get straight lines. And was a bit of a pain in the neck basically. Or so I then decided.

But great-great grandma's text was restored. And looked great. There was no doubt that the tape made a very attractive frame. I loved the sheeny pebbled effect of it. It was rather like leather.

I treasured the text for many years.

Then, one day in the late 1990s, I took it down to give the glass a polish. The doorbell rang. Uttering a naughty word, I stood up and... stepped straight on the text.

I said another very naughty word, and moaned at the person who had come to call on me. "It took me ages to restore that! And now I've got to get fresh glass and do it all again!"

But, although still not particularly religious myself, I was very fond of the text by then - it being a link to a previous generation of my family - and so I went back to the stationer's.

"Can I order some passe partout?" I asked.

The assistant looked at me blankly. "Woss that?" she asked.

I tried other stationer's.

It seemed, that at some point between 1986 and the late 1990s, passe partout had become obsolete.

"Why not buy a frame for the text?" suggested my wife.

I accepted that might be the only thing to do.

But surely, I thought, as it was so easy to obtain as recently as 1986, there must be some unused passe partout somewhere?